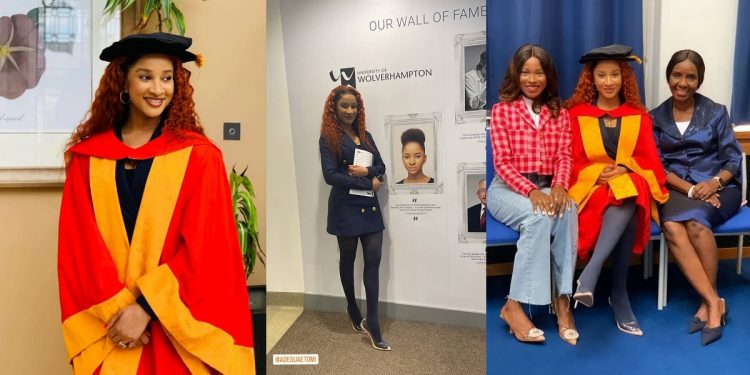 Nollywood actress, Adesua Etomi-Wellington received an honorary doctorate from her alma mater, the University of Wolverhampton for her contribution to the creative industries.

The actress and singer who obtained a degree in theater and performance in 2009, received a doctorate of arts in recognition of his phenomenal contribution to the arts and culture on Monday, September 5.

The ceremony was honored by her husband, singer, Banky W and their son, her mother, her best friend and colleague, Jemima Osunde, and others.

Not long ago, the actress and her husband had fans and followers gushing over a lovey-dovey exchange on Instagram.

Adesua had taken to her Instagram page to share stunning photos of herself when her hubby grabbed the opportunity to propose to her again.

her Instagram page, Adesua shared photos of herself in an elegant red dress red te and captioned them, “Mission Slay.”

Bewitched by his wife’s beauty, Bank W via comments asked her to marry him again.

“Marry me again”, he wrote.

In response, Adesua declared that she would marry him again at every moment of her life. See their exchange here

“Nobody gave me stinky money for an abortion” – OAP, Maria Okan tells how she found out she was going to be a single mother