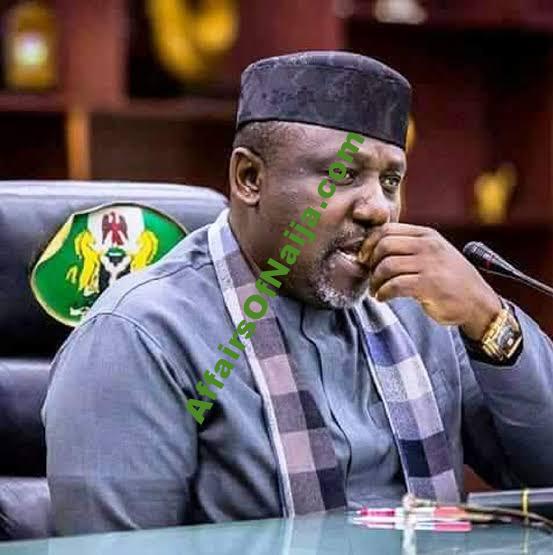 Indications emerged yesterday, that after laying siege for about 10 hours, operatives of the Economic and Financial Crimes Commission, EFCC finally arrested embattled former governor of Imo state, Senator Rochas Okorocha over allegations bordering on money laundering, abuse of office and embezzlement to the tune of N2.9 billion.

According to a highly placed EFCC source, he arrived at the headquarters of the EFCC in a white Toyota bus at about 6: 29 pm yesterday.

The source said that Okorocha is currently being interrogated by the operatives of the Commission.

It would be recalled that the Commission had earlier yesterday declared that its operatives laid siege to the residence of Rochas Okorocha because of his refusal to honour the Commission’s invitations.

It also alleged that attempts to arraign Senator Okorocha were stalled twice owing to the absence of the ex-Governor who reportedly evaded service of processes.

The Commission made the clarifications in a statement by its Head of Media and Publicity, Mr. Wilson Uwujaren.

The statement reads: “Operatives of the Economic and Financial Crimes Commission (EFCC), today May 24, 2022, arrived at the Maitama, Abuja home of a former Governor of Imo state, Senator Rochas Okorocha, to effect his arrest.”

“The move followed the refusal of the former governor to honour invitations after jumping the administrative bail earlier granted him by the Commission.

“EFCC had on January 24, 2022 filed a 17-count criminal charge bordering on diversion of public funds and properties to the tune of N2.9billion against Okorocha.

“The case was assigned to Honourable Justice Inyang Ekwo of the Federal High Court, Abuja but attempts to arraign Senator Okorocha were twice stalled owing to the absence of the ex-governor who evaded service of processes.

“At the last adjourned date, March 28th, 2022, Justice Ekwo before adjourning until May 30th, 2022, had warned that it was “the last adjournment I shall grant in this matter.

“In the circumstances, the Commission is left with no option than to effect the arrest of Senator Okorocha and bring him to trial.” he declared.