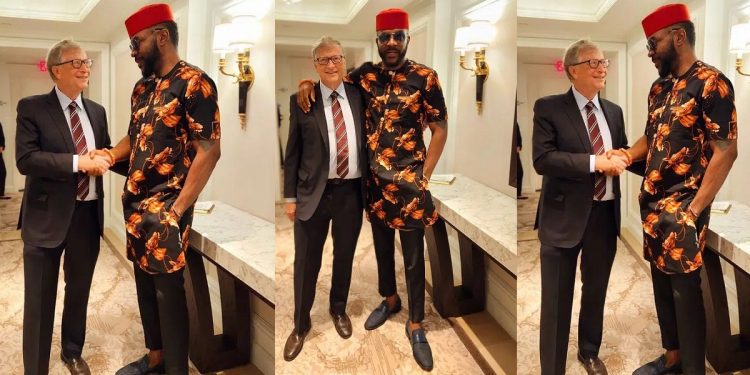 Popular media personality, Ebuka Obi-Uchendu, met with American business tycoon and one of the richest men in the world, Bill Gates.

Ebuka exchanged a handshake with the famous Microsoft co-founder and shared photos from the meeting on his social media pages.

“When Big Bill met Nnakenyi”, he captioned the photos.

React to photos, colleagues, fans, and followers praised d ‘Ebuka for his many victories and continued success in his career.

The photos earned him the admiration of veteran Nollywood actor, RMD, actress, Nancy Isime, and others who praised his resilience, dedication, and hard work.

Aisha Buhari had taken to her Instagram page to celebrate her daughter-in-law, who graduated with First Class Honors in Architectural Science from Coventry University, UK -United.

The first lady posted a photo of herself, her son, Yusuf, and his wife, Zahra, and captioned it

“Congratulations to Mrs. Zahra B. Buhari on graduating with High Honors in Architectural Science. Wishing you all the best from Nigerians who have labeled it as insensitive.

Polygamy: 'I won't be counted as a wife or coaxed into accepting a practice that doesn't align with my values' – May, actor Yul Edochie's first wife, speaks

Polygamy: 'I won't be counted as a wife or coaxed into accepting a practice that doesn't align with my values' - May, actor Yul Edochie's first wife, speaks