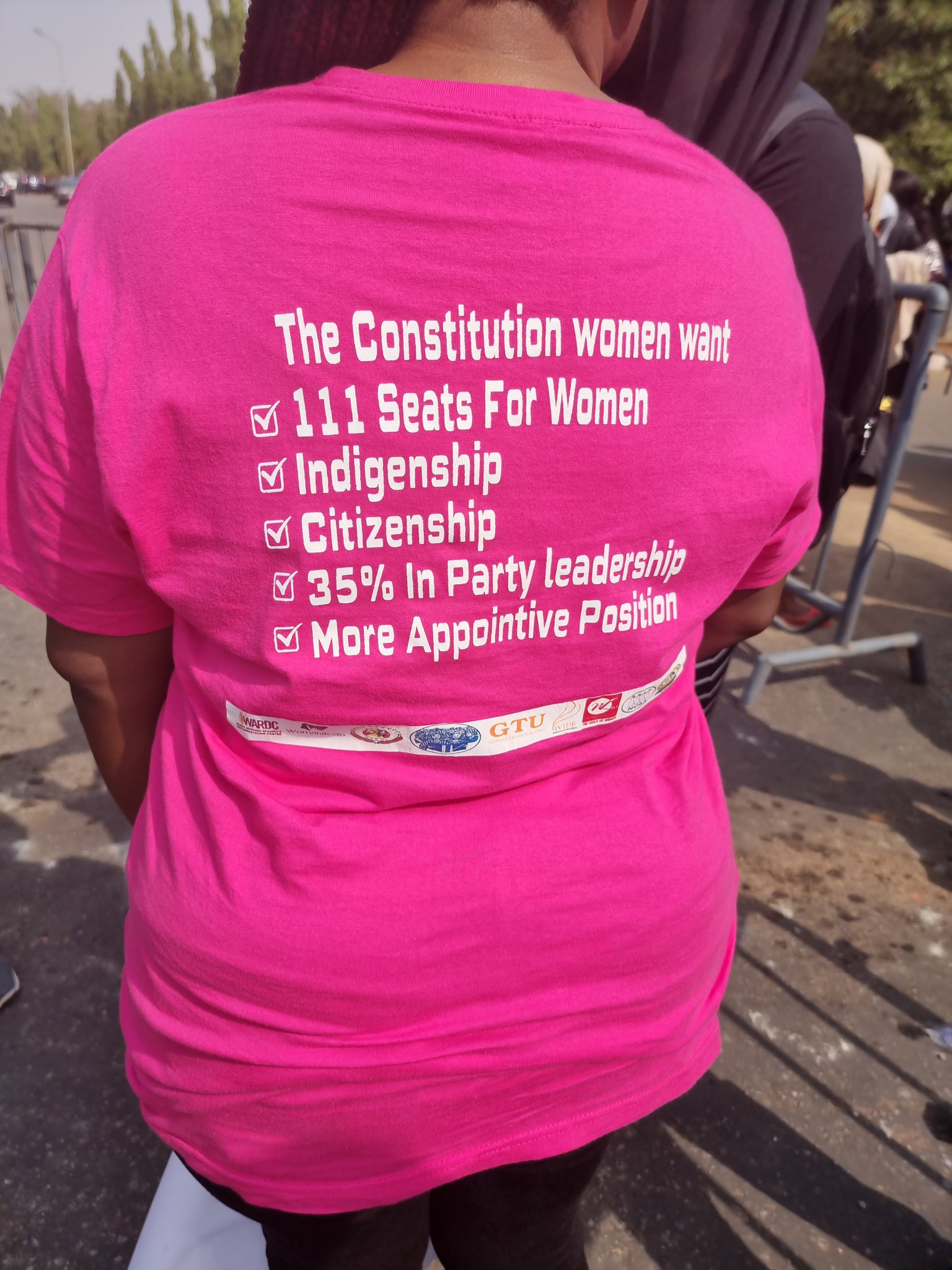 Today, March 2, 2022, Nigerian women took to the National Assembly to protest against the non-passage of of some gender-quality Bills by the legislature as part of the amendment of the 1999 constitution.

A statement by Women in Nigeria, a coalition of women-focused NGOs in the country, stated that: “Nigerian women are disappointed and aggrieved at the actions of the 9th National Assembly (NASS) Tuesday March 1, 2022 when they denied women the opportunity of inclusion and representation in governance by voting against the gender bills. The NASS has spoken loud and clear that they do not want progress for society: for mothers, aunties, sisters, wives, and for daughters.”

The proposed bills which were not passed include:

“It is particularly sad that in a month globally dedicated to celebrating women worldwide, our NASS has chosen to deny women basic human rights particularly, the right to identity and belonging. The proposed gender bills in the 5th Constitution Alteration Bills that were all rejected are Bills targeted at addressing the current gender imbalance across the legislative arm of governments across the country whilst reducing the under-representation of women in political office,” the statement continued.

The statement concluded: “Nigerian women therefore demand that all gender Bills be reconsidered. Ultimately, our demands will benefit not just women but Nigeria as a whole. More women in governance will only bring progress, and respect for Nigeria in the committee of nations. We cannot, in 2022, be negotiating the rights of women and the sanctity of the dignity of girls. We call on the National Assembly to represent these Bills as a matter of urgency and ensure that they are passed.”

This is very UNPOPULAR but today, women in Abuja are protesting against the misogynistic and repressive agenda against women by this 9th National Assembly.

Are you aware of all the bills that were rejected?

Here’s a thread of the constitution amendments.

About five bills sought to promote more opportunities for women in political parties, governance and the society at large.

All the bills were rejected.

Here are the provisions of the bills 👇🏾 pic.twitter.com/kNCkb4OBqB

Denying 35 per cent appointed positions for women and settling for 20 per cent. pic.twitter.com/BTHztrS3r7

This simply means there will be NO Favour for women in general, either in the political parties or leadership positions in general. pic.twitter.com/b6woHkf3mV