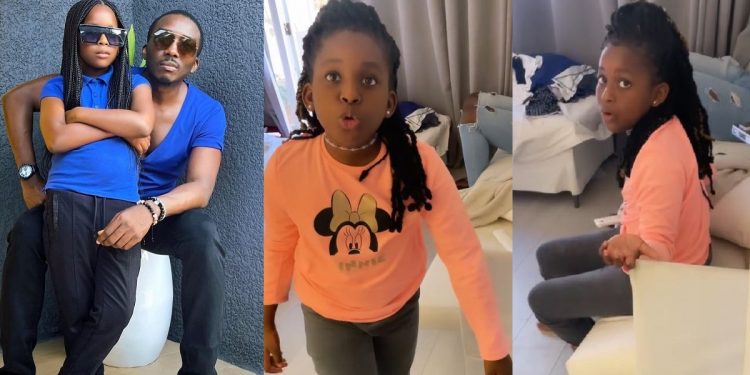 In the video the comedian shared on his social media page and garnered a flood of reactions from social media users, Elena was in the living room watching television while her brother helped their mother in the kitchen.

Bovi then asked Elena to join her brother in the kitchen, adding that she did not know how to cook.

Elena got up immediately, but informed her father that she was doing what he asked because she did not want drama on his part.

“I said OK, I’m not ready for drama, I’m going to help…Drama with you when you can’t cook”. She said.

Her response got a lot of social media users talking, with many labeling the little girl as rude.

Well, her father, Bovi, has now reacted in an Instagram post. According to him, times have changed – he noted that his daughter’s outspokenness was considered rude by the trolls.

He further stated that they were triggered because they were abused growing up so they couldn’t understand his interaction with his daughter.

“How times have changed 😀😀😀

UPDATE – I have read all the comments and I am convinced People see what “they want to see. For those who found it lighthearted, you can tell there’s an emotional balance in their lives. They could see that speaking freely doesn’t necessarily mean indiscipline. And we were basically cruising.

As for those who were alarmed, check it out, we were brought up to think that confident use of words is tantamount to being rude.That’s why in some places a more young person asking an older person “how are you” or “how are you” is considered rude Comfort You are triggered because you were abused growing up and mistook your outspokenness for rudeness. This does not mean that children cannot be rude. But in this scenario, she wasn’t rude. Courage!”

Singer, Yemi Alade plans to join Onlyfans as a socialite, Blac Chyna earns $20m a month on the app

Singer, Yemi Alade plans to join Onlyfans as a socialite, Blac Chyna earns $20m a month on the app