When Walt Disney Animation Studios approached Pan-African animation company Kugali Media for a one-of-a-kind collaboration, it had one clear goal—to get Africans to tell the African story through cutting-edge technology and a platform with infinite possibilities.

Walt Disney, a global giant in animation and film production, was not only keen to cash in on the continent’s booming film industry but also to tap into the bubbling potential of creative talent—and, of course, jump (or, maybe sprint?) ahead of the completion of Netflix, Showmax, and Amazon, all of whom are investing in original content in Africa.

The project, dubbed “Iwájú,” immediately tapped into a rich vein of storytelling. It was a moment worthy of the award-winning author, Ben Okri, who writes that the “mystery of storytelling… is the miracle of a single living seed which can populate whole acres of human minds.” This moment of conception, it seemed, would offer a veritable universe of “living seeds.”

The countdown to the release of the first sci-fi series on Disney+ in 2023 has now started in earnest. The series will include episodes set in Nigeria, authentically written and directed by African storytellers. And it all started with a “bang”. 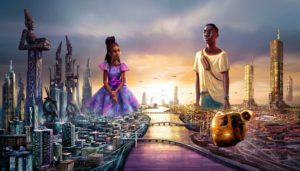 The three founders of Kugali Media told the BBC in 2019 that they were going to “kick Disney’s ass” and make a movie about it, which caused a big boom.

It may have been a daring statement, but it was not an empty threat; the company, founded in 2017 by Ugandan animator Hamid Ibrahim and Nigerians Ziki Nelson and Tolu Olowofoyeku, had started to rattle the regional industry by “telling authentic African stories through animation, comic books, and Augmented Reality.” 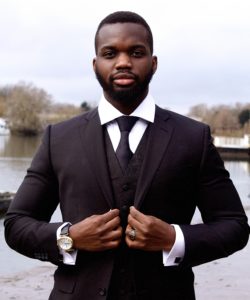 The team was armed with the skills, determination, and passion to make something of their driving ambition. Hamid, the creative director, Ziki, the creative writer, and Tolu, an animation virtuoso, had their eyes set on the pinnacle of success—playing in the big leagues.

“Their dream was to bring African stories created by African artists to the world, highlighting the diversity of cultures, histories, and voices across the continent. Their talents as storytellers blew us away,” she said.

The timing was perfect. Already, the success of Nollywood, the world’s second-largest film industry, is testimony to Africa’s teeming talent and potential in film production.

In an exclusive interview with the Bird Story agency, Tolu, who is deeply involved in the “Iwájú” project, agrees that the moment to tap Africa’s potential for film production, especially animation, is now. “The market is huge,” he said.

“There was hardly any animation scene in Africa five years ago… There has always been a small handful of people with the skills, and they made their money through doing animated adverts for companies, but hardly anybody made any animated series for TV or movies for the cinema outside of South Africa,” he said.

Tolu says many creatives are sprouting up across the continent. He adds, however, that the fledgling industry can only bloom and rival those in other regions if there is a real investment in developing and nurturing the industry’s nascent talent. Many industry professionals on the continent are self-taught. 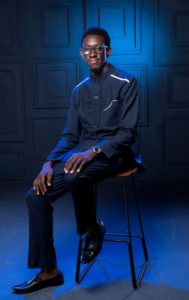 The promise of Africa’s creatives is personified by such producers as Ridwan Moshood, who taught himself animation using YouTube at a cybercafé in Lagos. He has now carved a niche for himself with his popular “Garbage Boy and Trash Can“ series, which airs on Cartoon Network.

While the industry is still a long way from reaching its full potential, Tolu is quick to point out that it has already come a long way. Baby steps are often the hardest.

“Many of those people can now collaborate with larger companies overseas to create these things, and some people have self-funded entire movies, animated shorts, or animated series. The industry is still clearly in its infancy, but at least now there is an industry to talk about, “he added.

“I never want to create things that people simply give a pass because they think I tried my best by Nigerian standards or something. Tolu added, “Shows such as Voltron, Dragonball, Ben10, Naruto, and Spiderman did not become worldwide hits because the audience could relate to the culture of the show or the culture of the creators, nor did people have to lower their standards to enjoy those shows.”

Instead, the Kugali Media team wants to have their work embraced and appreciated globally, just as Afrobeats or Amapiano are on the global music scene. 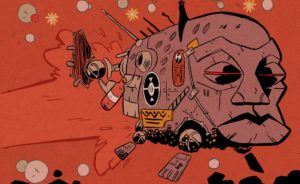 Tolu also points to the opportunities for African animation in video games.

“They combine the visual and auditory flair of live-action film and TV, the depth and attention to detail of literature, and the active mental and physical participation of sports into one single form of entertainment. As far as I’m concerned, no other form of entertainment comes close to the best experiences available in video games, “Tolu said, beaming with excitement.

Looking back on his journey, Tolu said he has always loved watching video games and dreamed of creating his own. Looking around the continent and seeing video producers such as Free Lives, based in Cape Town, Cameroon’s Kiro’o Games, and Kuluya, with headquarters in Lagos, he feels the new dawn is finally at hand for African storytelling.

Kugali Media’s dedicated, engaged, and growing fan base on social media is just as excited.

Faith Nyambura, a Kenyan primary school teacher whose daughter is a big fan of animation, learned about Kugali Media after Disney announced it was working with the company. She was happy that the idea that princesses and superheroes are only for certain races would be thrown out by an African series. 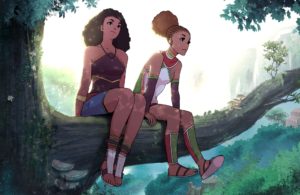 “I realised that our kids are being left out when it comes to African animation. My daughter loves watching SpongeBob, but the Iwájú film will not only inspire our kids but also fight racism. It is an amazing idea, and I am sure our children will be captivated,” she said.

Fellow Kenyan Elizabeth Natukunda, a Makerere University student, is excited about Kugali Media’s opportunity to create “real masterpieces.” Having watched highly successful foreign projects, she feels a top-end African animated series would be a big win for the continent.

“I recently watched Squid Game in Korean, not the dubbed English version. It communicated with me even though I didn’t understand the language. I have also watched anime in its native language and it resonated well with me. I’m excited to see our artists come up with such unique stories that show who we are, “she said.

Kugali supporters also come from further afield, including India, while fanart from Nigeria, Mexico, and the UK adorns the company’s Instagram page. As far as the fans are concerned, “It’s Showtime!” for Kugali Media.