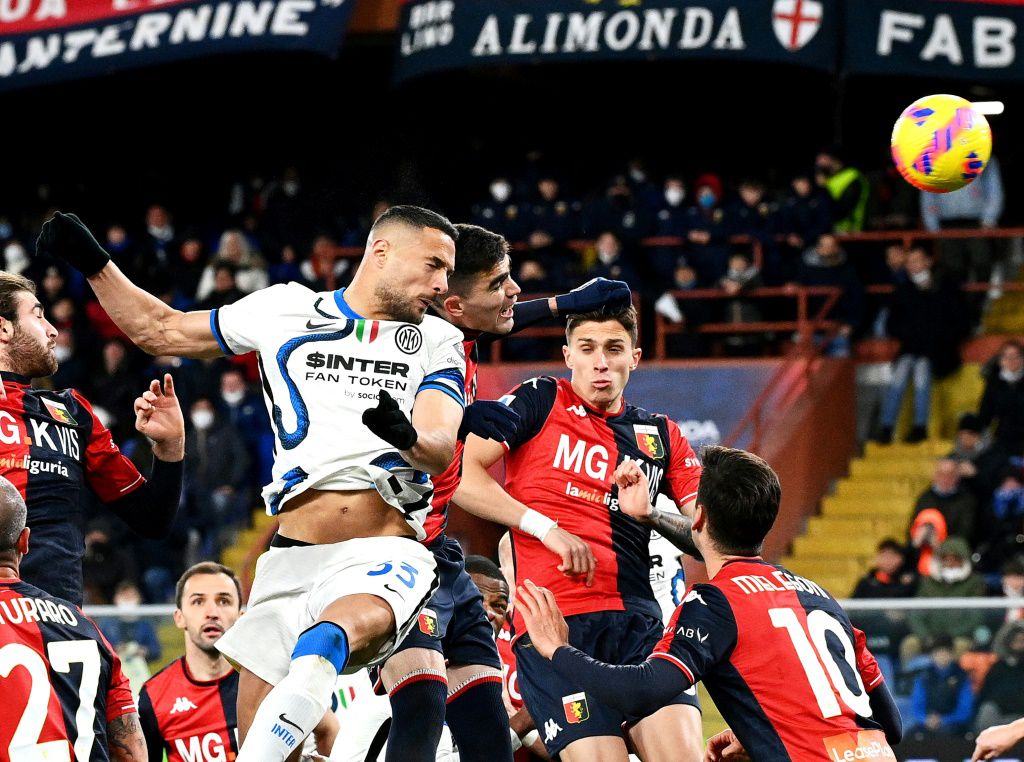 Champions Inter would have moved level on 57 points with Milan had they won at relegation strugglers Genoa but could not make the most of long spells of dominance at the Stadio Luigi Ferraris and stay two points off the lead.

Napoli can now reclaim the summit on goal difference with a win at Champions League-chasing Lazio on Sunday night before they host Milan next weekend.

Champions Inter have a game in hand on the two contenders to their title but have failed to win in their last four league matches in a mini-slump which has also seen them all-but eliminated from the Champions League by Liverpool.

“Regardless of what Milan did, today was two points lost,” Inter’s Danilo D’Ambrosio told DAZN.

The Milan giants will face off in the first leg of their Italian Cup semi-final on Tuesday while Napoli will have a whole week to prepare for another huge match after falling to a sobering Europa League defeat by Barcelona.

Inter had enough chances to take the points on Friday but again couldn’t find the finishing touch — a common thread in a worrying run of form for Simone Inzaghi’s side — despite having 21 shots against a spirited Genoa team backed by a passionate home following.

“When you have a lot of chances you have to put the ball in the goal,” added D’Ambrosio.

“But it’s a team game, it’s not just a problem with the forwards because defenders and wingers had chances to score too. We need to be more clinical regardless of what position we play.”

They came closest when D’Ambrosio headed Hakan Calhanoglu’s 62nd-minute corner off the bar, one of a host of opportunities on a breathless night in which Calhanoglu and Edin Dzeko, among others, were off target.

Leo Ostigard was immense at the back for Genoa, who stay in the bottom three on 17 points after their fifth straight draw, four away from Venezia who sit just outside the relegation zone.

Stefano Pioli could not believe that Destiny Udogie’s leveller was allowed to stand and earn Udinese their 1-1 draw at Milan.

Udogie said himself after the game that his muted celebration at scoring his first goal as a professional footballer at the San Siro of all places was because he “wasn’t sure” whether he had handled.

And Pioli vented his frustration at the decision after footage appeared to show the Italy Under-21 international touching the ball in with his arm.

“That equaliser should have been disallowed, Udogie clearly touches the ball with his arm,” he said to DAZN.

“We didn’t play particularly well but VAR should have seen it, it’s a clear error.

“It’s not the first time that we’ve been penalised (by a refereeing decision). Maybe Udinese would have equalised later, but this isn’t OK.”

Milan, who also drew at bottom side Salernitana last week, were underwhelming against a team sat in 14th which has won just once since the turn of the year.

An uneventful first half was livened up only by Rafael Leao’s 29th-minute opener, which came after the Portugal international beautifully brought down Sandro Tonali’s clipped pass, held off Rodrigo Becao before rolling in a calm finish.

Udinese were not happy about what they thought was a foul by Leao on Becao and after the break the away side came out with the bit between their teeth, Tolgay Arslan unlucky not to see his low strike slide just past the post on the hour mark.

Udogie scored the controversial goal which would earn Udinese the draw and Maignan had to be at his best deep in stoppage time to stop Gerard Deulofeu from snatching a dramatic win.

Rangnick calls on Rashford to rediscover his peak form

Rangnick calls on Rashford to rediscover his peak form