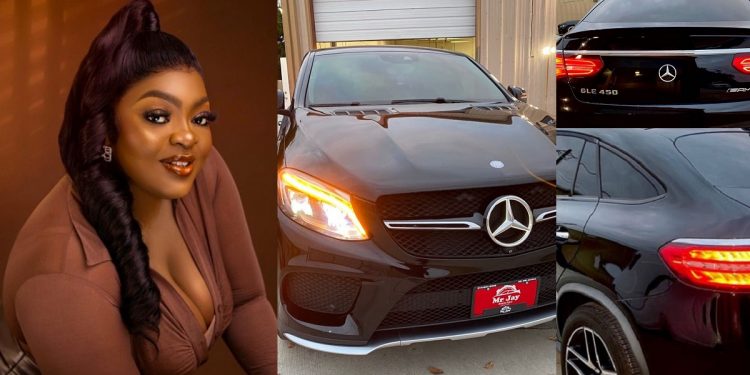 The actress, who entered a new era today, September 7, decided to “level up” with a Mercedes-Benz GLE 420 4Matic.

She took to social media to flaunt her latest acquisition and attributed it to the hard work and dedication.

The celebrant also expressed his gratitude to God for making this possible.

“Birthday present for myself……I really don’t know where to start but I’m trying shaaaaa……. It’s pure hard work, you can all attest to that. @thank you for sorting this machine out for me you’re the reason I was going back and fourth in Dallas but no vex to say the money don’t come once…….. It’s not easy to come up from level….. Thank goodness we made it……. Na me go dey drive am myself because Ojuri at 😂😂😂😂😂😂😂🔥”.

See more photos of the whip below below,

Moreover, Internet users have a little trouble accepting that there’s a new Eniola Badmus in town and she’s here to stay!

The Nollywood actress, who once had a tall figure, rocked the Nigerian internet a few days ago. months when she started flooding him with pictures of herself slimmer and ripped.

News of her transformation was all the rage at the time with many people wondering what that it took her to get the body she has now. Well, it’s months later and netizens still can’t get over her new body.

And it seems that every time she leaves Posting new photos of herself, reminding people of what she looks like now, it still seems like a surprise to many who aren’t quite familiar with her new look yet.

The actress took to her official page a few hours ago to share new photos of herself and a user who is still in awe of her transformation, a said: How Eniola Badmus grew from a sugar mummy to a secondary chick needs to be investigated.