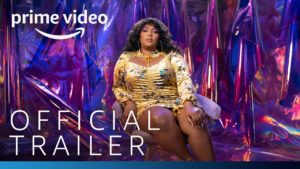 Lizzo‘s eight-episode Amazon Original reality show, her debut project with Amazon Studios, “Watch Out for the Big Grrrls“, is almost here, and there’s even a trailer.

According to a news release, the new series follows “global superstar and icon Lizzo, who is on the hunt for confident, bad-ass women to join the elite ranks of the Big Grrrls and join her world tour. With 10 hopeful women moving into the Big Grrrls House, they must prove they have what it takes to make it to the end and join Lizzo in front of a global audience on the center stage.”

Helping Lizzo along the way will be an elite team: VMA-nominated choreographer Tanisha Scott (who’s worked with Beyoncé and Rihanna) alongside long-time Lizzo squad members, Marie Van, Shirlene Quigley, and Grace Holden – dancers who have accompanied her on her tours already.

The hunt for backup dancers for the next global tour will include veteran choreographer Tanisha Scott and current dancers Chawnta’ Marie Van, Shirlene Quigley and Grace Holden. Nneka Onuorah, a documentary filmmaker, will direct the show, which will be produced by Amazon Studios, Bunim-Murray Productions, and Lizzo’s own production company, Lizzo Bangers.

“Lizzo’s Watch Out for the Big Grrrls” will premiere Friday, March 25 on Prime Video.

Check out the trailer for the series below.