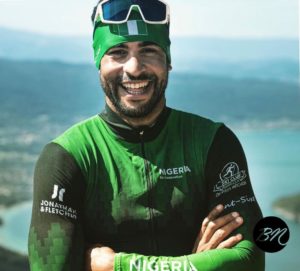 Nigeria made its debut in cross-country skiing at the Beijing 2022 Winter Olympics, all thanks to Samuel Ikpefan. He set a record in 2021 when he became the first Nigerian skier to compete in the World Cross Country Ski Championships in Germany and the World Cup in Sweden, respectively.

On Monday, February 7, he took to Instagram in a green headscarf with the flag of Nigeria in green and white on the front, saying “I am looking forward to giving the best of myself.”

Before embarking on cross-country skiing as a career, Ikpefan trained in several other sports, including football, judo, and, of course, skiing.

Ikpefan experienced a major setback in 2011 when he was rejected by the French skiing team. That’s when he decided to call it quits and didn’t return for another five years. In 2016, Ikpefan learned that he could compete as a cross-country skier for Nigeria, his second home, albeit he would have to wait until 2018 to begin his career in the sport. He contacted the Nigerian Skiing Federation. Their vice-president wanted to test Ikpefan by asking him to participate in a demonstration in Nigeria. Ikpefan accepted the challenge and, for the first time in his life, went to Nigeria.

“It was huge, it touched me,” Ikpefan told Olympic.com. “I saw my father again for the first time in a year as he moved there for his retirement. When I walked on Nigerian soil, I started to get emotional. Some tears came to my eyes.”

He said he intends to inspire younger Nigerians to take up skiing.

Here are a few more things about Samuel below:

“By their nose, you shall know them” – Yul Edochie writes as he shares photo with his daughter, Danielle

“By their nose, you shall know them” – Yul Edochie writes as he shares photo with his daughter, Danielle