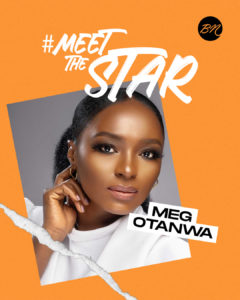 Give her her flowers!

Fans of “Before 30” may remember her as Aisha or Yejide in “October 1,” Angela in “Ratnik,” Kimberley in “Payday,” or Jane in “Kpians: The Feast of Souls.” When Meg Otanwa, who plays in the role of Derin, the mother who suffers from postpartum depression, quietly leads a drama that is reinforced by believable performances from her on-screen husband, Gabriel Afolayan, and her impatient mother in law, Tina Mba, it’s hard not to be impressed.

Meg Otanwa is, without a doubt, a star.

Here’s a quick synopsis: After the complicated birth of her first child, Maria, Derin becomes withdrawn from family life; unable to engage in the celebrations around her newborn. Struggling to come to terms with what it means to be a mother, Derin fails to bond with her baby and becomes a shadow of herself.

BellaNaija’s Damilola caught up with the polyglot, who is fluent in five languages, including Yoruba, Spanish, French, Hausa, and her native Idoma, and has two Master’s degrees (in Human Resources Management from TIME University Tunis, Tunisia and in Business Administration from Jean Maulin University, Lyon, France).

To discover more about her experiences on the set, as well as the pleasure that acting brings her, check out our interview below.

Let’s start with a question that piqued my interest: You speak five languages: English, Yoruba, French, Hausa, your mother tongue, Idoma, and some Spanish. In other words, you are a polyglot. How did that happen?

Yes, I do speak these languages, but the actual polyglot is my father. He speaks about nine (9) Nigerian languages. Growing up was a lot of fun because, between my siblings, we spoke different languages at different times. My father had this cheeky thing he did where he talked in different languages to his children. For instance, if you speak Yoruba, he’ll have you snitch on others who don’t speak it. To be fair, I think I also just have an ear for languages.

You have a strong résumé: a Master’s degree in HRM and an MBA and used to work in finance; also, you were once a BellaNaija contributing writer. Why did you decide to venture into acting?

I know right, it’ll be nice to resume writing for BellaNaija. I had a lot of fun doing that.

Yes, I wanted to see and learn more about the world. This quest took me around a few countries, working and studying. Yes, I studied at Université Jean Moulin in Lyon, France, and before my return, I worked at the African Development Bank in Tunisia. I always wanted to make movies. I just wanted to know more about the world around me before I settled into the movie industry, which is what I did. I’ve never stopped learning, though. An actor is a student for life.

You did an excellent job as Derin in “For Maria Ebun Pataki.” How did you become involved with this project, and what were your initial thoughts after seeing, reading, and digesting your script?

Thank you very much. I got to know the director, Damilola Orimogunje, at the time he was preparing to shoot one of his first films. He had reached out to me to be a part of it, which I accepted. However, there was a scheduling conflict when he was finally ready to shoot, so I couldn’t be a part of that particular job. But Damilola and I stayed in touch. We discovered that we had similar tastes in movies. We would talk about movies for hours and share a list of movies to watch and filmmakers to study. So we formed a bond.

When he got the script for FOR MARIA, he shared it with me and asked if I’d be willing to take on the role, seeing as we had been talking about films and were looking forward to working together. I read the script, and what stuck out to me instantly was the weight of the story. It was heavy and intense, and I knew it would require 100% commitment on my part. It was scary. I told him to let me sleep on it, then we could talk about it the next day. Of course, I was going to do it. I just needed that time to be sure I was ready to give up all of myself to become Derin.

“For Maria Ebun Pataki” is an example of how Nollywood has been progressive in sharing stories concerning mental health. In what ways do you think this film would move the needle forward?

Oh, it’s one of the most exciting things about the reception this film has gotten. The director wanted to spark conversations around postpartum depression, seeing as it appears to be a thing of shame and most women would rather not talk about it. So, imagine how we feel reading tweets upon tweets of people finally sharing their stories and shedding light on the topic.

The first thing about preparing to become Derin was knowing who Derin was. She talked about how old she was, where she grew up, what her parents did for a living, her siblings, how she met and fell in love with her husband, her favourite colour, etc. Every single detail about her. Then there was the in-depth research around postpartum depression. How rampant it was, signs and symptoms, and talking to women who have been through it Then came the physical transformation. The director had expressed how much he would love for everything to look authentic, so I chose to gain some weight to have a believably postnatal body. I also shrunk my hair, and as I did all of these things, Derin gradually came to life.

To achieve a realistic postnatal body, I chose to gain some weight for the role. I took a pix d day b4 I started gaining weight and d 2nd was my belly a few days before shoot.
I’m honored by your feedback.
Thank you. ❤️ #formariamovie
FOR MARIA is on NETFLIX @NigerianNetflix pic.twitter.com/AXj9GM9Cx0

Was this a role that had a big impact on you? Can you share how?

What can I say? I’m honoured to have been allowed to tell this story. All that I went through to bring Derin to life, I consider my contribution to telling a very important aspect of motherhood that hasn’t been spoken about enough for years now.

What was the most challenging scene to shoot, and how did you manage to let go of this character at the end of the project?

It’ll be difficult to pick out one single scene as the most challenging. Being Derin was one of the most difficult things I had ever done. Every single scene was challenging and heartbreaking for me. Getting out of the character took a much longer time than I expected. It also gave me a few more lessons on depression.

What is it about acting that keeps you coming back? What do you get out of it that you can’t get elsewhere?

Acting is my life. The ability to give life to an idea on paper using one’s entire being. It’s an incredible feeling.

Do you have any pearls of wisdom for new moms and dads attempting to make their way in the parenting world based on what you’ve learned in your role?

To new moms and dads, I’ll say seek as much professional help as you can.

Before we end, are there any other words of wisdom that you held to your heart throughout your acting journey?

Always remember that we are on earth to serve a higher purpose than ourselves. Live purposefully.

“A lot of men prefer ‘hungry girls’ because all they have to offer is money” – Relationship coach, Blessing Okoro

"A lot of men prefer 'hungry girls' because all they have to offer is money" – Relationship coach, Blessing Okoro