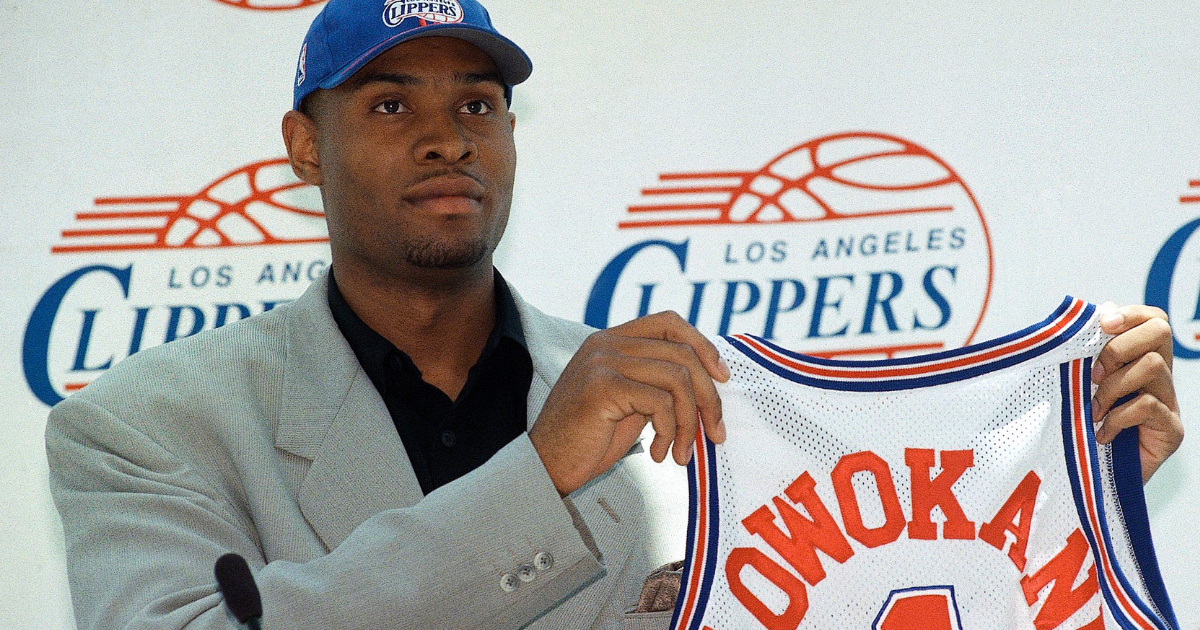 
It should automatically guarantee that whoever has the first pick gets to select the best available player but that is not always the case for different reasons.


Here are the top five worst first picks in recent NBA history, these players massively underperformed and disappointed the teams that selected them first ahead of 59 others.


Michael Olowokandi was selected first overall in the 1998 NBA draft and at the time rightly so. The Nigerian centre had averaged 22 points and 11 rebounds in his final season of college basketball and looked like the real deal.

Standing at 7 feet tall with a 7ft 6in wingspan, Olowokandi was generally perceived as a top-two pick going into the 1998 draft so it was not surprising that the Los Angeles Clippers selected him first overall.


But the 1998 lockout right at the start of his professional career coupled with multiple injuries were just some of the reasons Michael Olowokandi never reached the heights expected of him.


To be fair he did have a decent NBA career and was a functional big man for the Clippers, Timberwolves and Celtics ending his nine-year career with just over 8 points and just under 7 rebounds per game.

Those numbers are only bad in the context of what is expected from a first pick and also the fact that he was selected ahead of the likes of Paul Pierce, Dirk Nowitzki and Vince Carter.


Pierce and Nowitzki went on to be champions and were both listed as part of the best 75 players in NBA history while Carter won rookie of the year and is on course to become a Hall of Famer.

When the Golden State Warriors selected Joe Smith with the first pick of the 1995 NBA draft, they had hoped he would be their franchise player for many years to come.


And while Smith did last very long in the NBA, in none of his 16 years did he look like a franchise player for any of the 11 teams he played for.


He functioned mostly as a role player, averaging a respectable 10.9 points per game and 6.4 rebounds but more was expected from a player who was selected ahead of Kevin Garnett.

Greg Oden was selected first overall in the 2007 NBA draft by the Portland Trailblazers, notably ahead of Kevin Durant. And while Durant is a multiple NBA Champion, MVP and finals MVP, Oden is widely regarded as a bust and has been retired since 2016.


He missed the entire first year of his professional career and has been plagued by multiple injuries ever since, he only played three NBA seasons.

Kwame Brown spent 12 years in the NBA and played for seven different teams in that period but managed to achieve next to nothing in the game.


Brown averaged 6 points and 5 rebounds per game in his entire career and was mostly known even while playing as a bust.


Despite getting direct counsel and tutelage from arguably the greatest player of all time, not even Michael Jordan could help Kwame Brown.

The only reason he is not number one on this list is that he gets a pass, a benefit of the doubt if you will, simply because he was drafted by the Washington Wizards straight out of high school in 2001.


Though talented, he was not mentally strong enough as a high school kid to deal with the men in the NBA, even though other players have successfully done so in the past.

The 2013 NBA Draft is a good indication of why scouting is not always reliable as Giannis Antetokounmpo, one of the best players in the world right now was picked 15th overall.


Rudy Gobert, one of the best centres in the league right now and multiple Defensive Player of the Year award-winner was selected 27th overall.


The Cleveland Cavaliers had the privilege of picking first and they chose Anthony Bennett ahead of these other guys.

He only went on to play four NBA seasons, each with a different team before he was out of the league which he has been since 2016.


The fact that Bennett is 28 years old and currently plays for a team in Taiwan is all the indication needed to conclude that he was indeed the biggest waste of the first pick in NBA history.