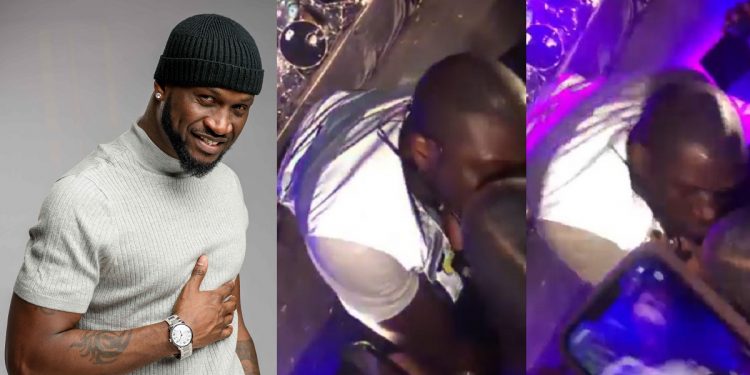 Nigerian singer, Peter Okoye, better known as Mr. P, sparked reactions on social media after crossing the lips of a fan at the chance during a recent performance.

Mr. P and his brother, Paul Okoye, are currently on the “Psquare CitiesWorldTour” , and during their performance in one of the selected cities, he shared a passionate kiss with a lady in the crowd.

In the video of this moment currently making the rounds, Mr. P leaned down from the stage, approached the female fan, who then grabbed her face, and the two kissed passionately.

As it happened, the audience screamed with excitement cheering the singer and the lucky lady.

The video has since generated reactions from many fans and followers of the singer.

In reaction, a Twitter user @ Just_Franklin_ wrote, “This one wasn’t.. You kiss a person you don’t know where their mouth goes in”.

@JoysSparkle, “Lmao. Performed as an upcoming act. So classless, no wonder madam left you 😂”.

@mmuyiiwaa, ” This is so irresponsible! Also unprofessional. What was he thinking?? Isn’t he married? It’s crazy 😂”.

In the meantime, this is not the first time that the singer makes such a move on stage. Recall that he kissed a fan during their sold-out concert in Dallas in August. Read here.