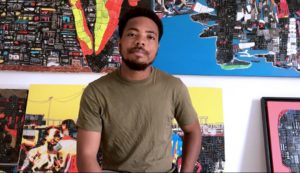 His art is raising awareness of the world’s problem with electronic waste by using old mobile phone keyboards in his work. This is how he does it:

Born in the city of Buyo, in the southwest of the Ivory Coast, Mounou Désiré Koffi has always had a passion for art. That passion-and his obvious skill recognized throughout his school-going years and then through college, gave him what so many creatives on the continent dream of professional training and then a career in visual art.

It was during an interview with the Bird Story agency in his workshop in Bingerville, a small town near Abidjan, that he said that he wanted to start a professional career. “I wanted to paint, try to be different, and bring my creativity to my work,” he said.

It was only in 2018, however, that Koffi’s journey as an artist crystallised. And it all had to do with his other passion: recycling.

“My mission is to give e-waste a second life,” he said. 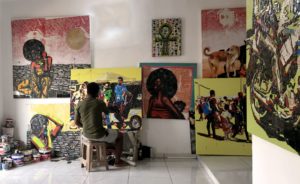 In 2019, Abidjan’s Galarie Parisiene Art-Z played host to his first solo exhibition, giving his art and his vision a voice.

“I lived in an environment where this waste existed. The telephone is essential in life; people use it a lot, and when the gadget stops working, they dump it in the trash bin, and more and more of it ends up in the streets. There is no mechanism to manage it, “he explained.

As an artist, I thought to myself, why not use things that people had discarded and then bring them back to the people who had used these phones in a different form? we’re trying to give a second life to these mobile phones.

He hopes to use the proceeds from his art to open recycling centres and help educate Ivorians and people across the region about the opportunities that recycling affords. A graduate of Abdijan’s Ecole des Beaux-Arts, Koffi’s passion was discernible as he reclined on the chair and described his journey not only as an artist but as an individual doing his best to keep the environment clean and healthy. 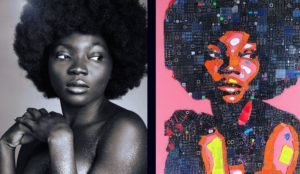 There is certainly no scarcity of raw materials in his country. According to Ivorian government statistics, the country churns out more than 9,000 tons of electronic waste annually.

Nor does Koffi work alone. He has a team of young people who help him collect used telephone keypads from the city’s back streets, dumpsites, and telephone repair workshops. Some of the e-waste in the repair shops comes from neighbouring countries, especially Benin and Burkina Faso.

Koffi regards his work as an aesthetic opportunity to focus attention on contemporary issues like recycling, a toxic environmental hazard that is a headache for manufacturers, dealers, and users. Koffi’s art also shows how technology has changed over time. Mobile phones used to have keypads, but now they have more sophisticated touch screens.

Touch screens are often used to make the feet of his characters, and broken glass is used to show how new technologies can be both good and bad. 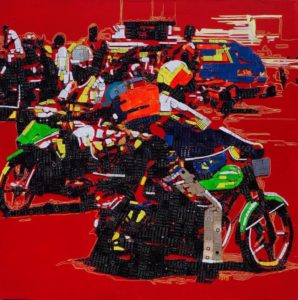 One of Koffi’s admirers is Olivier Sultan, director of the Art-Z Gallery. He said of Koffi’s work, “The painter achieves a happy marriage between impressionism and figurative art.”

Koffi’s works have been exhibited widely, both at home and abroad, including in Germany and Belgium – at the invitation of Brussels-based Congolese painter and entrepreneur, Kévin Michel.

Most significant, for Koffi, was the Grande Rencontre des Artistes Peintre Africains (GRAPA) exhibition, where he savoured plaudits and recognition from eminent artists and art collectors from Africa, Europe and Latin America.

Despite his growing fame, he tries to keep his prices affordable to local collectors.

“Prices are not the most important thing for me, I want to leave traces in history because over the years we will not see these phones with these keys and my goal is for these paintings to appear in museums within 20 or next 30 years,” he said.

While Koffi’s works are already available in virtual galleries worldwide, his main goal is to focus locally and open art training centres across Ivory Coast to educate and mentor the next generation of e-waste recyclers — his contribution to saving the planet from choking in e-waste and becoming a better home for all.

Be Transformed with The Catalyst: Dating With self Confidence

Be Transformed with The Catalyst: Dating With self Confidence