Home » Entertainment » This Study says Tanzania, Kenya & The Comoros Are Among the World’s 10 Most Naturally Beautiful Countries

This Study says Tanzania, Kenya & The Comoros Are Among the World’s 10 Most Naturally Beautiful Countries 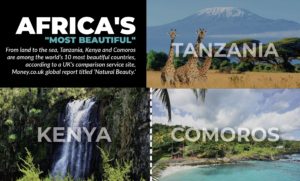 Three African countries have scooped the top slots in a global ranking of countries with the most and best tourist-pulling natural beauty spots. From land to sea, Tanzania, Kenya, and Comoros are among the world’s 10 most beautiful countries, according to a UK comparison service site, Money.co.uk, the global report titled “Natural Beauty.”

Tanzania ranked fourth globally, tops the continent with a natural beauty score of 6.98 out of ten, supported by, among others, a huge forest cover, a high number of prominent mountains and a longer coastline.

With 1,424 kilometres of coastline length, the East African nation also has 387,944 square kilometres of tropical forest area. It also has a total of 836 protected areas and 75 glaciers. From magnificent mountains to colourful coral reefs, the world’s natural marvels are a huge draw for travellers, said the report.

Kenya is ranked sixth globally with a 6.7 rating and comes second in the continent; it also has the second-highest mountain in Africa, Mount Kenya.

It also boasts a total of 411 protected areas, 536 kilometres of coastline length, eight volcanoes and 28 glaciers.

Comoros, a volcanic archipelago off Africa’s east coast, closed in on the tenth best slot in the world and the third most beautiful place in Africa, with its “perfumed islands,” loved by tourists for their great scenic beauty and fragrant plant life.

Kenya’s pre-pandemic international tourism arrivals were the highest in East Africa, pegged at 2 million in 2019. Tanzania recorded 1.5 million, while the number of arrivals for Comoros was 45,100 during the period. While the ranking did not concentrate on the quality of beauty, it ranked countries based on the number of natural features like volcanoes, coral reefs, tropical rainforests and glaciers per 100,000 square kilometres. According to the authors of the report, “While beauty is ultimately subjective, it’s clear that these countries have a lot to offer visitors, whether they prefer adventuring in the mountains or relaxing by the coast.”

The three African nations toppled some key first world countries such as France, the United States of America, Japan, and Australia, which placed eighth, twelfth, and fourteenth positions, respectively. Not even the UK came close: the country did not appear in the top 50 list.

Indonesia’s popular natural attractions, including the tropical forests of Sumatra and Kalimantan and some UNESCO World Heritage Sites, such as the Komodo National Park, propelled the nation to the top of the global ranking with a score of 7.77. Mexico (6.96), India (6.54), France (6.51), and Papua New Guinea (6.39) settled for fifth, seventh, eighth, and ninth positions, respectively.