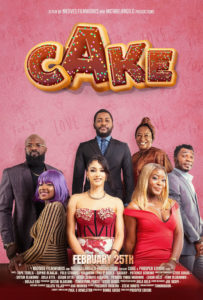 Check out the trailer for “Cake,” a romantic comedy about a talented baker who gets caught in a love triangle with two beautiful women. The main characters in the film are Tope Tedela, Sophie Alakija, and Folu Storms, who are joined by Big Brother Naija alumni Saskay, Patience Ozokwor, Emmanuel “Koloman” Jibunor, and Philip Asaya.

Dotun Olakunri and Steve Gukas, the team behind “93 Days” and “Living in Bondage: Breaking Free,” executive produce “Cake.” It is directed by Prosper Edesiri and produced by Tongryang Pantu.

“We can’t wait to share “Cake” with the world,” executive producer Otunba Dotun Olakunri says. “It is a brilliantly told story about a love triangle that will leave cinemagoers asking for more. The Director and actors bring out the best in a film that people will find most relatable and enjoyable.”

In the Natives Family Friendly Films Project, a partnership between Natives Filmworks and Michelangelo Productions, a total of 12 films, including “Cake,” are scheduled for release. The project takes advantage of a focused human capacity development initiative to produce a slate of 12 films that showcase the creativity and skill of a new generation of film directors telling meaningful stories to entertain families.

“Cake” will be released in theatres on February 25, 2022, by FilmOne Distribution.

Watch the trailer below: