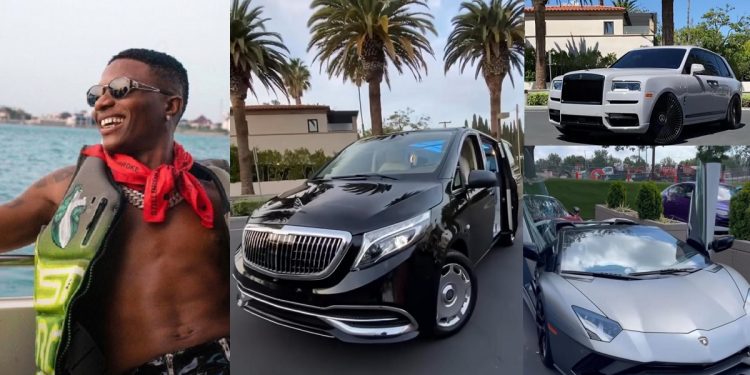 Popular Nigerian music superstar, Ayo Balogun aka ‘Wizkid’, made a foolish boss move today as he spends millions of naira on seven luxury vehicles at a time.

The multi-award-winning singer, known for his quiet movements, has just acquired a Rolls Royce Cullinan Black Badge, a Lamborghini Aventador and a Mercedes Maybach Minivan.

The logistics company, MOA Global Services, went to their page Official Instagram to announce the singer’s expensive purchases, along with photos and videos of the luxury cars.

Moments after making the announcement, the brand revealed that Wizkid had requested four additional vehicles, making it seven vehicles in one day.

However, the ‘Essence’ singer didn’t post anything about it for purchase on his social media page but he liked the brand’s post.

See photos and videos of the high-end vehicle below,

This comes shortly after his colleague, Burna Boy, caused a social media frenzy after stating that he would have been punched in the face if there were no friends.

Burna Boy revealed this during an exchange with Twitter users after they challenged him when he listed his album achievements 2019 on the microblogging platform, while reacting to a tweet that listed the achievements of some record-breaking African artists. his answer contradicted what had been said. This caused tweeps to reply to him and he in turn replied to some of them, which led to a rather interesting exchange.

In a now-deleted tweet, the singer confessed that if it wasn’t for the fact that he and the singer, Wizkid were friends, he would have punched him in the face just to let his fans know he’s not Davido. Read here

'She invites trouble into her house, an inquest is going to pop a lot' – Lawmaker Maria Ude Nwachi says after Mercy Chinwo showed off her husband's brand new SUV