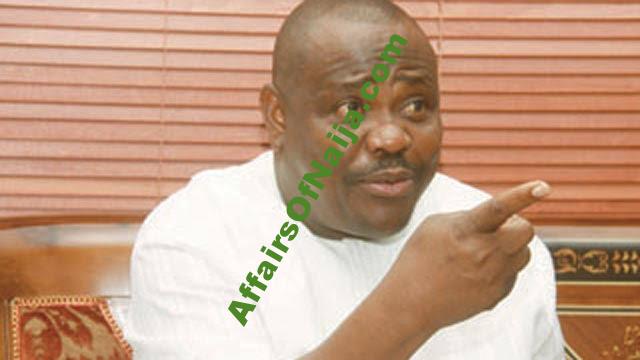 Rivers State Governor, Nyesom Wike yesterday, blasted and lampooned governors from the southern region for betraying and causing him to lose the presidential ticket of the Peoples Democratic Party (PDP) to former vice president Atiku Abubakar.

Governor Wike, spoke yesterday, during an event organized to welcome him after the PDP primary in Rivers State, monitored by Nigerian Pilot described the governors from the South as “betrayers” and stated that they will “suffer” for their actions in the nearest future.

The Nigerian Pilot recalled that the Rivers governor attacked his southern colleagues a few hours after Atiku paid him a visit at his Abuja residence yesterday.

“We have done our own part, we never betrayed anybody because it’s not in our blood to betray. It is a shame to those people…some of our governors of the south that they are the people they used to sabotage us. Moreover, we have shown them that we are not like them, we have the capacity to do whatever is good for us”, he declared.

It would be recalled that the Rivers State Governor came second at the primary election with 237 votes while the winner, Atiku, polled 371 votes with the help of Sokoto State Governor, Aminu Tambuwal, who had stepped down and asked his supporters to vote for the former vice president.

Wike told a cross-section of his supporters that attended the event that he is happy and proud to have run against Atiku and made a political statement on the importance of Rivers State as “of the three states” that determine the outcome of general elections.

He added that his decision to run for the PDP presidential ticket was taken based on the agreement of the southern governors that the presidency should return to the region in 2023.

“As far as I am concerned, there is nothing we should worry about. I contested the election based on the principles and agreement of all the southern governors and leaders of the South that the presidency should go to the South this period.

“I don’t want to talk about some other people who cannot even win elections in their own places. I have told them that in this election, I made a vow to the PDP, that whoever emerges, I will support him. Yes, it might be painful for you or us, but we cannot abandon the party. And let me also say, those who do not understand and take Rivers State for a ride, now have learnt their lessons.

“You need us. Forget about these people who have nothing to offer. I saw one governor who was dancing; meanwhile he did not bring one delegate.

“For me, we have done what we are supposed to do and stood firm in what was agreed upon by the entire South. Leave his history for the betrayers of their own people. History will judge them. They will live and see how betrayers suffer. We have done our own”, he further stated.

Speaking further, Governor Wike added, “If I wanted to scuttle this convention, I would have done that. There are people you think are human beings but are not human beings.

“I told Atiku Abubakar this afternoon when he came to see me that some of the people who are following you here don’t have one vote. They are empty, I have votes. So, I have something to offer”, he maintained.

Buhari off to Spain

Buhari off to Spain