Home » Entertainment » Yvonne Orji chats with Ebuka about Her Nigerianess, Career & Everything in Between on “Black Box Interview”

Yvonne Orji chats with Ebuka about Her Nigerianess, Career & Everything in Between on “Black Box Interview” 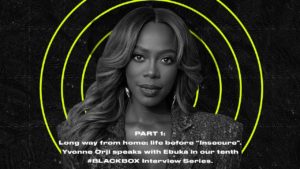 Actress. Comedian. Author. What a triple threat! Yvonne Orji‘s steady climb in Hollywood isn’t a surprise to many. As shown in her role in the successful HBO television series “Insecure,” the Nigerian-American actress continues to push the envelope.

For her portrayal of Molly in Issa Rae‘s series, she was nominated for a Primetime Emmy Award in the category of “Outstanding Supporting Actress in a Comedy Series.” She means business and she’s all about it, with her hilarious HBO comedy special, “Yvonne Orji: Momma I Made It!” and a new book, “Bamboozled by Jesus: How God Tricked Me Into the Life of My Dreams.”

In this special episode of the interview with Ebuka Obi-Uchendu on “Black Box,” Yvonne, who was born in Nigeria before relocating to the United States, discusses the experience, culture shock after moving, her life, work, and everything in between.

Watch her interview below: